back to all projects
Online activations, Twitch Activation
Action Against Hunger
STREAM AGAINST HUNGER 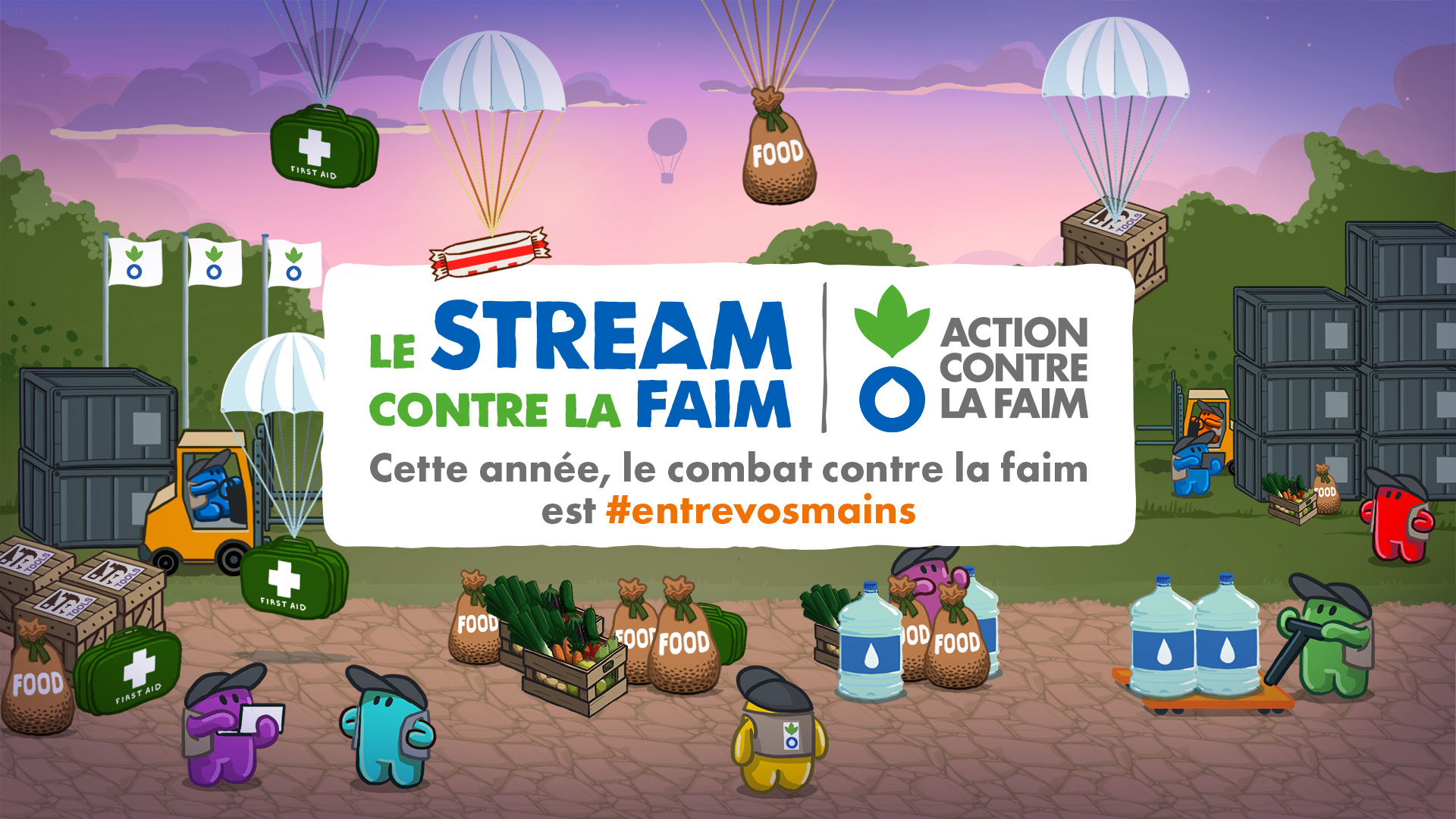 Context For more than 40 years, Action against Hunger has led the global movement that aims to end life-threatening hunger for good within our lifetimes. Its mission is to save lives by ending hunger through the prevention, detection and treatment of undernutrition, especially during and after emergencies related to conflict and natural disasters. In 2019, thanks to the generous donations, Action against Hunger took action in 46 countries around the world, helping more than 17 million people. In 2020 however, the pandemic crisis prevented the NGO from collecting donations outdoors for many months. This shortfall will likely leave many people in a situation of emergency and lead to a hunger crisis.

To face this problem, Action against Hunger France launches an online fundraising campaign this December.

Challenges As part of a first strategic partnership, Action against Hunger France turned to Biborg and its gaming expertise to find a quick-to-set-up but creative solution to call on the French Gaming Community’s generosity during the upcoming holiday season.

While this project is an opportunity to raise awareness around the NGO’s mission among a younger audience, the main objective is to collect 200 000 euros to support Action against Hunger’s work - such as treating & preventing undernutrition and fighting the underlying causes of hunger.

Creative Thinking Biborg first immersed Action against Hunger France into the gaming landscape, to discover gamer habits and needs; as we all know, it’s key to understand the vertical before jumping in this world - even for a NGO.

The good thing is, supporting meaningful causes is already part of the gamers DNA as shown by the Z Event and many other examples. But that’s not all, a whooping 67% of gamers would even accept to join forces to raise funds for charity! #Geek Philanthropy

Based on our knowledge of the gaming community, and despite the tight timings, we wanted to stay true to our learnings to keep our activation relevant for gamers:

From these learnings, we knew we had to give streamers relevant tools to engage with their viewership and celebrate their support towards Action contre la Faim.

Production Challenge accepted! We set up a digital fundraising on Twitch in record time, live from December 11th to 31st, as an integral part of their global fundraising campaign: #Entrevosmains. 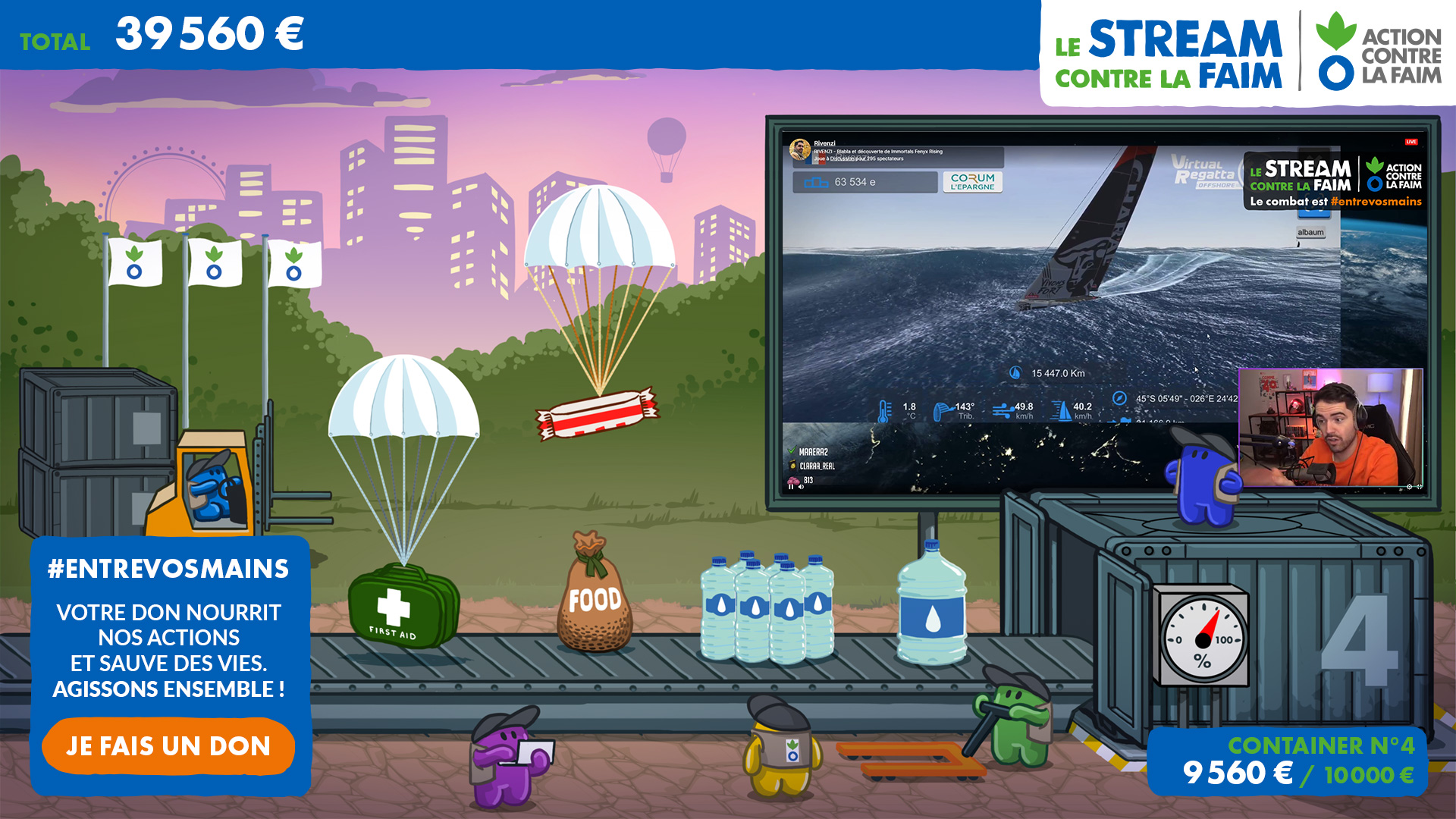 As the cornerstone of our digital fundraising, we set-up an Action against Hunger Twitch Channel where viewers are able to donate directly through the Channel to the NGO.

Partnering with French Overwatch & Valorant shoutcaster Shaytwan, we recruited more than 15 streamers such as Rivenzi, Nostal, Adyboo, or KAOsvmd to promote the operation and leverage donations.

We provided them with a small and easy-to-set-up ACF Twitch overlay, and they agreed to give us a little bit of their time despite their busy Christmas schedule.

Thanks to our toolkit, any streamer, big or small can support the cause and promote the fundraising. If you are interested, download the toolkit here

To gamify the donations and make them tangible, the Stream contre la Faim is broadcasting 24/7 an animated scene filled with food crates, water, medikits, unlocked in real time whenever someone makes a donation!

In addition, we set up a planning of hosted dedicated content with our partners to be hosted directly on the ACF Twitch Channel.

Finally, to ensure awareness and understanding around Action contre la Faim’s mission, volunteer interviews and mini-documentaries from the NGO’s current fundraising campaign, #Entrevosmains are frequently broadcasted on the channel. We even got Shaytwan invited to the Le Matin gaming show of Webedia to spread the word about our campaign!