back to all projects
AR, Branding
PlayStation
DEATH STRANDING

Surrounded by mystery since the first revelations, Death Stranding, is the new game from the legendary creator, Hideo Kojima, launched on PlayStation 4 on the 8th of November 2019.

The title is a fantasy video game long awaited by fans since its first revelations at the E3 event in 2016. The game is full of surprises, with numerous five-star celebrity appearances like Norman Reedus, Mads Mikkelsen, Léa Seydoux and Guillermo Del Toro to tell a story about the state of mankind and human connection in a post-apocalyptic future. 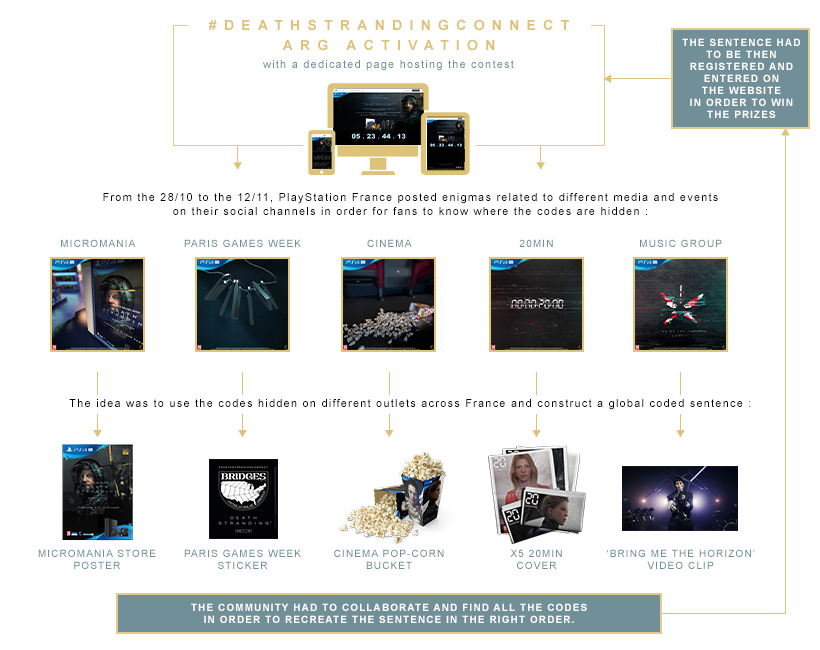 For its launch in France, PlayStation chose Biborg to orchestrate an ARG (alternate reality game) activation where clues, in the form of puzzles are hidden online and offline in different regions of France. PlayStation launched the giant treasure hunt quest on multiple platforms and devices in the form of enigmatic clues whereby fans are invited to decrypt codes together. An example can be seen here for the cinema enigma on PlayStation's Facebook page.

The activation lasts until the 19th of November. Clues can be found at the PlayStation booth during the Paris Games Week, in Micromania stores, on popcorn cinema boxes, the daily magazine - 20min and in a music clip of the British rock band, Bring Me the Horizon since their song Ludens is present on the soundtrack album of the game, Timefall.

Designed by PlayStation and developed by Biborg, the launch campaign activation mixes a multitude of physical and online media with the aim of winning one of many prizes, for example : a limited edition Death Stranding branded PS4, branded goodie packs, products signed by Hideo Kojima, prizes provided by partners present in the game such as JFRey and Monster Energy sunglasses and many more.