menu
back to list
Online activations
SIEF - Returnal - #NoRageQuitChallenge - Twitch Activation
Context
For the release of Returnal, a PS5 exclusive game combining both TPS and Rogue-Like style, PlayStation wanted to hit it big and right on the mark.
For the occasion they reached out to Biborg in order to create an impactful activation, in touch with the spirit and rhythm of the game.

Challenges
The main challenge we faced was to reach two distinctive audiences in one activation.
On one hand, we had a mainstream audience perhaps apprehensive of Rogue-Like games because of the try-hard and punitive reputation, but also because those who might have tried out the latest remake of Demon’s Souls were frustrated by its difficulty and complexity.
On the other hand, we also had to show Returnal as a challenging game to touch and convince the core Rogue-Like gamers in order to appeal to their try-hard preferences.

Creative Thinking
Following current trends and what we found during our creative thinking, we decided that a Twitch activation would be the most impactful opportunity for our client.
Our strategic team analyzed the habits and motivations of our main target audience, and we discovered that many Rogue-Like core players truly loved to challenge themselves and hence spice up their run in those types of games.
Furthermore, we saw that those challenges brought viewers to be more active and engaged with their content when streamed.
As for the more mainstream audience, we found many insights showing that at some point, players rage-quitted a rogue-like game either because of the frustration felt after continuous failures, or the high-difficulty that they couldn’t overcome.

Creative Answer
Thus, in order to both reassure a mainstream audience about the game accessibility and show that this Rogue-Like could be challenge worthy, we came up with the idea of setting up a special activation on Twitch in a challenge format under the name #NoRageQuitChallenge.

Our idea was to reunite 6 top streamers to give the best of themselves by taking up In-Game challenges. When looking for those participants, we wanted to have rogue-like core players profiles as well as people more capable of touching a mainstream audience and still be resilient enough to give their best in our #NoRageQuitChallenge.

To encourage them in giving their all, each successfully completed challenge would unlock gifts for their viewers, starting from game keys to a PS5 digital edition.
For this challenge, Biborg produced every asset from the Twitch overlay to the promotional assets used on PlayStation France’s Social Media.

We wanted to celebrate every PlayStation player on Twitch, and it seemed essential for us to include people with communities of all sizes.
Therefore, we activated 50 Grassroot streamers used to playing Rogue-Like and Souls games; by using our internal tool Radacast, we were able to identify and pick the appropriate streamers for this activation. They were selected based on their high engagement and interactivity with their viewers, and we offered them to participate in this #NoRageQuitChallenge.

In addition to mobilizing streamers, we also worked in a more creative way to include Returnal in the Twitch platform, along with working on a streaming community kit including emotes and alerts reflecting the game universe. This kit is still currently available here. 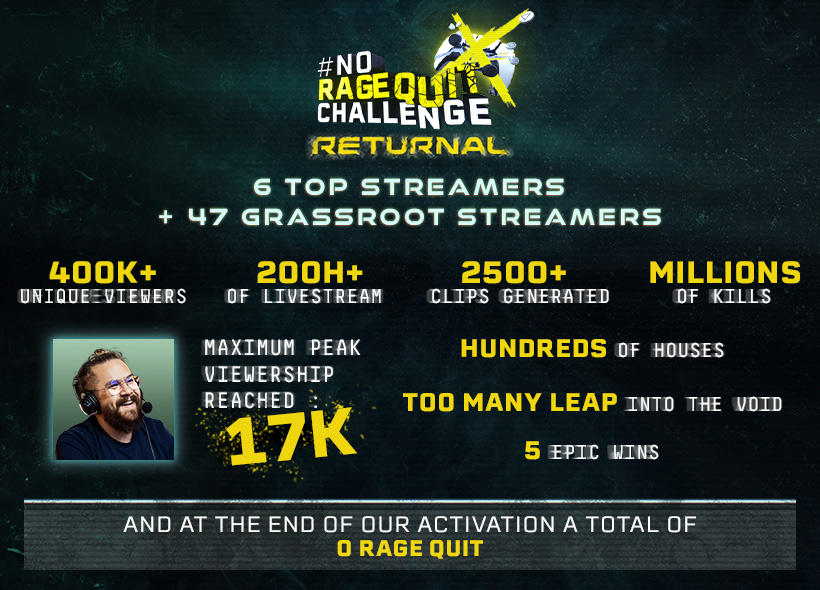