Context After four years of being present on the esports scene, Ubisoft and Biborg worked on a Dynamic Optimisation Campaign (DCO) to develop Tom Clancy’s Rainbow Six Siege as an esport brand and grow its viewership at a worldwide level.

Rainbow Six Siege is an online tactical shooter video game that puts heavy emphasis on environmental destruction and cooperation between players. Each player assumes control of an attacker or a defender in different gameplay modes such as rescuing a hostage, defusing a bomb and taking control of a capture point.

Challenge With approximately 50 million Rainbow Six Siege players, there is quite a lot of potential for fans to be interested in the esport side of the game as they are qualified to understand and enjoy competitions. The challenge therefore was to boost the Rainbow Six esport progression by capitalising on the fan and player base.

Campaign Biborg proposed to create an 'Epic Moments Media Burst’ campaign to attract a larger qualified audience using 1st and 3rd party data. The paid media campaign was only triggered at epic moments happening in the stream, showcasing the best occasions with the integration of a YouTube livestream embed player.

The ‘epic moment scenarios’ Match point - When the teams reach the match point level, for example the score could be at 6/7 and there is one point left to win the match.
Comeback - The occurrence of a team overcoming a substantial disadvantage in points or position. After thinking the team is defeated they come back Expected match - Two great teams playing against each other Semi Finals - This scenario displayed the four teams still in competition Grand Final - This scenario displayed the two teams for the grand final 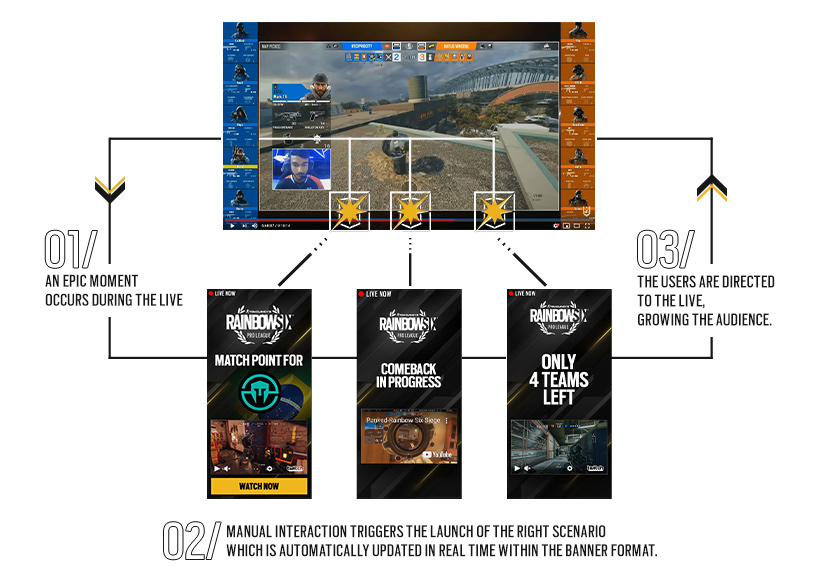 The focus was on the ESL Pro League Finals in Japan which was on the 9th/10th of November 2019. Biborg operated the campaign for the two days of competition by creating multiple formats, covering the full event which included seven matches during two days, across 8 teams through multiple digital formats in eight languages.

Google's Real Time Triggers What gives us the motivation to watch long sporting matches? It’s the epic moments that usually engage and get us excited, so for this campaign it was decided to focus on these sought after moments instead of live streaming the whole game. Google’s, “Real Time Triggers” were used which allow the instant reach and engagement with the audience in the moments that matter by syncing the campaign with real-world signals. These signals instantly trigger the launch of the campaign and accelerate delivery so impressions are served only at the right moments.

The triggers were manually carried out from Biborg's end, meaning that when one of the scenarios from the event was occurring, human interaction triggered the launch of the moment which automatically passed to the banner. Biborg is the first agency in the gaming industry to use the Real Time Triggers and to integrate its use in a DCO campaign.

Media plan and formats First time working on the media strategy, Biborg entirely managed and operated the campaign in partnership with Ubisoft’s media team, carrying out the live optimisation and programming of the campaign through Google’s DV360 and Campaign Manager platform.